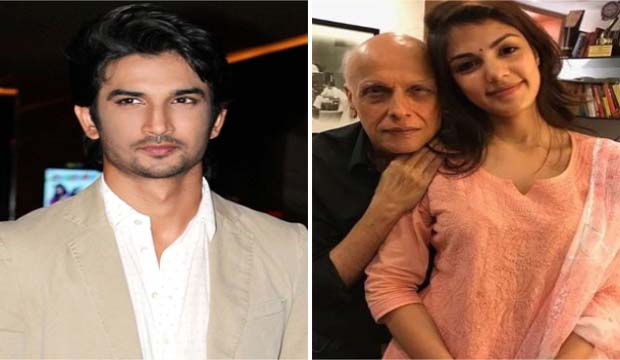 Her being a woman has exposed herself to relentless media and online scrutiny, much of it based on her gender

‘Her entire game is up!’

‘Rhea Chakraborty needs to be called a witch because she does witchcraft.’

These are some of the choice sentences used to describe actor Rhea Chakraborty. On several TV channels and on social media, Chakraborty has been accused of abetting actor Sushant Singh Rajput’s death by suicide. They are collected from a wide cross-section of people. Some are YouTubers, others are Rajput’s fans and there is even a comment by the Bihar DGP among them.

The deceased actor’s family, too, has made similar claims.

Though the commentators may be unconnected individuals and from diverse backgrounds regionally, their take on the matter is similar. Chakraborty, whose role in the actor’s death has not been ascertained, is the subject of this online trial.

A death and a police complaint

On June 14, Sushant Singh Rajput was found dead at his apartment in Mumbai’s Bandra. Soon after, the late actor’s family alleged that Chakraborty, Rajput’s girlfriend, had abetted his alleged suicide and registered a case against her in Patna on July 28. The complainant was Rajput’s father, Krishna Kishor Singh.

Since then, Chakraborty has been the centre of relentless attention on news channels and attacks on social media. Meanwhile, Rajput’s family has also filed a police complaint against six others, including members of Chakraborty’s family, accusing them of abetting his alleged suicide.

In his complaint, Rajput’s father has also sought to invoke provisions of the Mental Health Care Act, alleging that Chakraborty and her family members had caused his son’s mental health to deteriorate despite his successful career in films, ultimately driving him to death.

He also claimed that Chakraborty had created a “distance” between Rajput and his family, had threatened to make his medical history of mental health issues public, and had also convinced Rajput to leave his residence by telling him false stories of paranormal presence in the house.

Gendered abuses have come thick and fast for Chakraborty, from TV anchors to Bhojpuri songs with abusive lyrics being forwarded on social media.

Rajput’s sister, meanwhile, was quoted as having made a comment regarding what she believed was Chakraborty’s use of coercion and “black magic” on Rajput.

The “black magic” angle was pounced upon by the national media. Recently, a prominent Hindi news channel ran a programme with the headline, “Sushant par Rhea ka kaala jaadu (Sushant was a victim of Rhea’s black magic)”. An accompanying graphic showed the deceased actor trapped in a glass jar while Chakraborty practiced the said “black magic” on him. Several other news channels followed suit.

Tarushikha Sarvesh, assistant professor of sociology at the Advanced Centre for Women’s Studies at Aligarh Muslim University, says that the media has been extremely irresponsible in their coverage of the issue. “The gender bias has been quite evident. The media has been irresponsible in handling the issue. There is a difference between reporting and sensationalising. They cannot corner people and pronounce them guilty or evoke negative sentiments about them,” Sarvesh said.

The fact that channels have sought to target Chakraborty reflect the misogyny in Indian media houses, the scholar said. “It is as if the media wants to say that by being a woman, you are already a witch. This amounts to harassment and must affect the mental health of the concerned persons,” she added.

Chakraborty moved the Supreme Court on August 10. Calling what she was going through an unfair “media trial”, the actor had demanded in court that the relentless media coverage of the case be stopped.

Page nine of the affidavit filed by Chakraborty said, “Sensationalizing and Media Trial of case – the sad incident of the death of Sushant Singh Rajput who hailed from Bihar unfortunately occurred just in wake of elections in Bihar. This has led to the issue of the suicide being isolated and blown out of proportion.”

Chakraborty has claimed that she is being ‘unfairly targeted’.

Activists who work on women’s rights agree with her claim.

Advocate Karuna Nundy, who has been following the Rajput case closely, expresses concern. She said, “Rhea Chakraborty’s media trial is something that should deeply worry all women. There is a way in which [this] woman has been taken out of a particular situation and labelled a criminal by national mainstream media, in Bhojpuri songs, [and] by lawyers on national TV.”

She added, “Rhea Chakraborty was someone who was in a relationship with Sushant Singh Rajput. Clearly the family did not like it – another piece evidence that has crept into the public domain. Let us be clear that there will be lots of evidence that we have absolutely no idea about and those could point to the direction of anyone’s guilt. Why is there such demonisation of this woman? This trope in our minds that family is always right and another person who might have loved Rajput a lot is wrong, there is a gender component to it. Not only is she a woman – she is a particular kind of woman.”

According to Nundy, Rajput’s family’s lawyer said in court that by appearing in a video wearing a salwar kameez, Rhea was trying to “whitewash” her image.

Nundy added, “The implication is that if you’re not wearing a lot of clothes, you are a criminal and if you’re wearing a salwar kameez, it’s a cover-up.”

Mahatma Ayyankali and the bullock cart he rode to challenge caste...