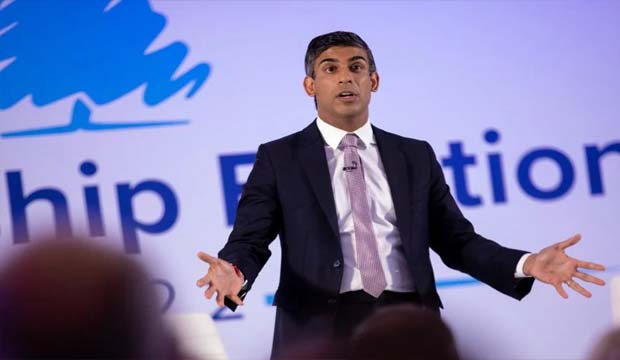 There can be no denying that Rishi Sunak is representative of the religious and racial minority in a nation still numerically dominated by white Britons. However, his policies may not follow what the Hindutva brigade thinks.

“Sunak is more Hindu than Indian. That is what he & his Hindu wife vouch for & more famously, he had taken an oath by placing his hand on the Bhagwat Gita as a British parliamentarian. He boasts of his Hindu traditions & culture with a lot of pride. That’s where his Indian connection ends. He is a naturalised British-born Britisher, without a doubt,” Post from a schoolmate’s WhatsApp group (Identity withheld).

Rishi Sunak being chosen as Britain’s Prime Minister has been met with euphoria within significant sections in India and among People of Indian Origin across the globe, especially sympathisers of majoritarian Hindu nationalism.

The development has been depicted by these groups as an occasion for celebration because it marked the emergence of a person of Indian origin and a practising Hindu to boot as the ‘ruler’ of the country that colonised India. This response, however, is chauvinistic and sectarian in its entirety.

Many have argued that Sunak’s elevation gives a further push to the process of ‘reverse-colonisation’ of the western world by ‘Hindu India’ as this development is seen in conjunction with the election of other Indian-origin politicians to public offices in several countries. (Leo Varadkar and Kamala Harris, among others, were mentioned in these conversations)

Sunak’s rise to the position was possibly more accidental and due to indiscretions and errors made by his Conservative Party rivals than because of his achievements as a lawmaker from 2015 and Chancellor of the Exchequer from 2020 to 2022.

But, notwithstanding the fact that the Conservative Party had little to fall back on but Sunak at the critical stage it found itself post-resignation of Liz Truss, his elevation marks a rare moment of Britain embracing its multicultural trait.

In ways more than one, Sunak’s elevation underscores the country’s racial transformation, underway over several decades as immigrants arrived in droves from former colonies.

Despite this, Sunak’s rise to the pivotal position cannot be considered a ‘permanent’ change for the better, putting behind centuries of racialism. Possibilities lurk that leaders within the Tory party may have already started planning for a change of leadership before the next election.

Yet, this development warrants applause for reasons opposite to what Hindu nationalists are forwarding.

Sunak’s rise to the position he now occupies is the result of both the people of Britain and the Conservative Party accepting the multicultural reality of the country that has been emerging from when the British Empire began shrinking, and its global prestige and power started diminishing.

Paradoxically, acceptance by the British of their pluralism is being cheered most vociferously by the ideological community that denies and decries its own pluralism within its own nation. There can be no denying that Sunak is representative of the religious and racial minority in a nation still numerically dominated by white Britons.

Before cheering Sunak, the Hindutva brigade would do better at looking inward and asking two questions: Would the present political regime in India permit or promote a Muslim or Christian to a top post within the government, a position that is not merely of ornamental value, but wields power? As it is, the Bharatiya Janata Party has consciously chosen not to have a single Muslim parliamentarian in either of the two Houses.

Secondly, if a person of Indian origin, whose ancestors migrated to Britain some decades ago through a route that included considerable time in an African nation, becoming premier is seen as an epochal event, why were leading members of the BJP protesting the possibility of Sonia Gandhi becoming prime minister in 2004?

The deceased Sushma Swaraj, who later held a significant portfolio in Narendra Modi’s cabinet too, threatened to self-inflict violence by shaving all her hair in the event of Gandhi’s selection/election for the top job.

When a reminder of this was served on October 25 after social media warriors started exuberating a Hindu and an Indian (in this order and not the other way around), becoming Britain’s prime minister, a leading member of the party falsified facts.

BJP’s foreign affairs department head, Vijay Chauthaiwale, claimed that the Italy-born Gandhi had “refused to take Indian citizenship for several decades after marriage with Rajiv” (Gandhi). In contrast, the truth was that she became an Indian citizen in 1983, fifteen years after the marriage in 1968.

This delay, although conspicuous, certainly cannot be termed “several decades”. Furthermore, the long wait was due to certain stipulations in the law prevalent till 1983.

In cheering Sunak’s Hindu and Indian identity, votaries of Hindutva ignored the fact, probably because of its discomforting nature, that in Britain, for the past few decades, the identity of people in politics has been mattering less and less with every passing year.

This contrasts with India, where identity-based politics is now the daily mantra. Even safety and access to constitutionally ordained rights are dependent on the identity of the person.

Moreover, the spectre of Hindu nationalism’s ugly majoritarian outlook is beginning to cast its spell over countries where political parties have made concessions to the Hindu sentiment. In recent years, the Conservative Party in Britain has wooed the Hindu voter and citizens based on their religious identity as against the Labour Party’s approach of mobilising them or enlisting them as Asian migrants based on class identities in the earlier decades.

From the time Modi stepped on foreign soil as prime minister in 2014, he consciously addressed massive ‘rock-concert’ style public meetings for the Indian diaspora, starting with the first he held in September 2014 in Madison Square Garden in New York.

At these meetings, Modi addressed the diaspora not just as Indian Prime Minister but as Hindu Hriday Samrat or Emperor of Hindu Hearts. This public image was constructed and projected for electoral gains in the aftermath of the Gujarat riots when he was chief minister of the state.

While being addressed as Hindus may not have affected any change of heart in the minds of political leaders like Sunak, it certainly polarised the Indian diaspora on lines of ‘us’ and ‘them’, as they are divided within India.

As a result, despite multicultural bonhomie, polarisation within the south Asian community became a sad reality in many countries. In an extreme instance, violence erupted on lines of religious identity in Leicester in September.

The Indian government’s response on these occasions has been driven by the objective of consolidating majoritarian support within India by ‘speaking up’ for Hindus in other countries.

The worry is that majoritarian jubilation of Sunak’s elevation may alienate him from the non-Hindu sections of his support base and weaken forces of multiculturalism in that country. This would certainly hurt his chances of leading the Conservative Party in the next elections. Thus, the new British PM must not wear his Hindu identity on his sleeves and clearly separate his public role and personal choices.

Sunak’s ascent to the preeminent position is also testimony to the unworkability of Conservative sloganeering, from Boris Johnson to Liz Truss, possibly even prior to this.

Those cheering the appointment of Sunak would do well to comprehend that Johnson and Truss got voted into office based on popular slogans which failed to become workable policies, as a result of which their tenures were cut short.

This holds lessons for populists the world over, most importantly in India. After all, this regime is sustained not due to positive policy initiatives. Instead, it is sustained primarily based on whipping up hate and distrust against followers of non-Indic religions.

Populist leaders would do well by comprehending that Johnson and Truss had to step down due to ideologically driven policies. Till a few months ago, Johnson appeared invincible. It took just a few errors and past indiscretions coming to light to bring his regime down and hurl his party into a crevice from which Sunak now has the unenviable task of extracting it.

But more than anything else, cheerleaders within India must have no illusions that Sunak, or for that matter, Kamala Harris (if any opportunity for more important and independent decision-making comes her way), would act as citizens of the countries that trusted them with the position, and not as persons of Indian origin or as Hindus. That identity is purely limited in the personal domain, unlike in India, where religious identity is the basis of politics.