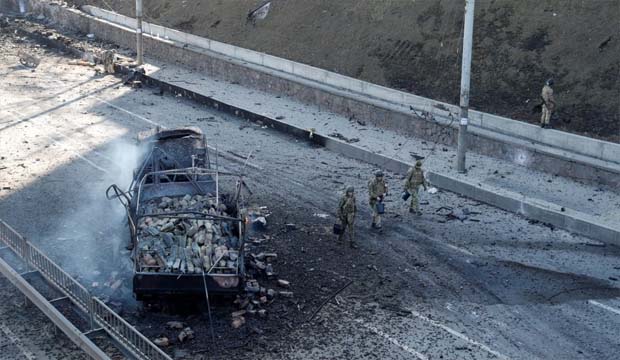 News reports reveal that Raytheon and Lockheed Martin, globally amongst the most advanced armament makers, were openly telling their investors that the Ukraine conflict was good for business. 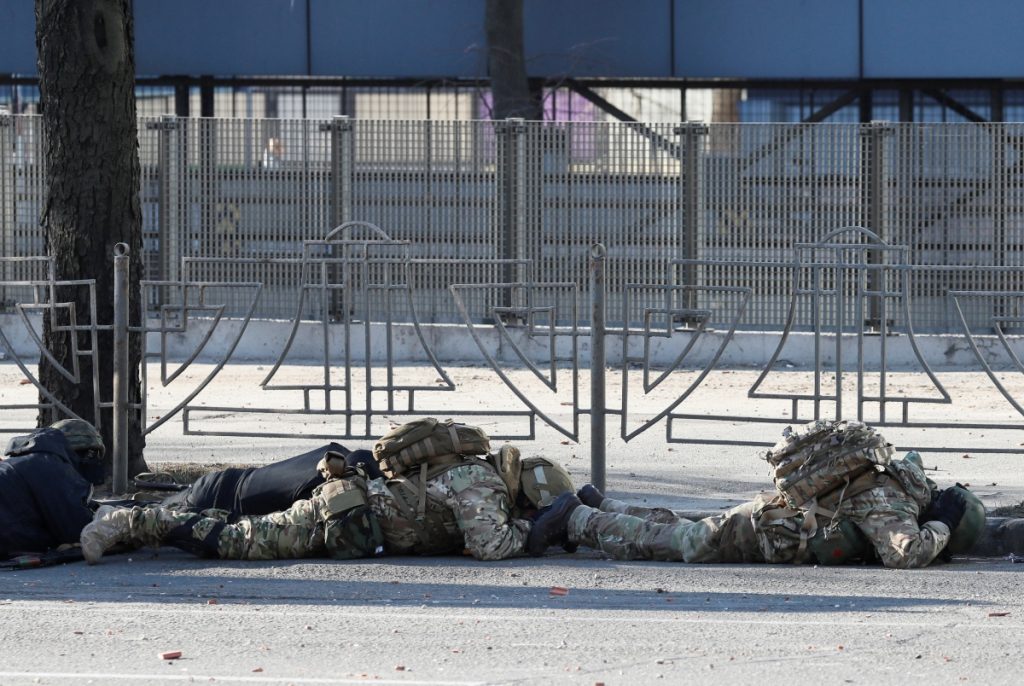 New Delhi: War, as the old adage goes, is always good for business. And as the world emerges from the two-year-long bruising COVID-19 coronavirus pandemic, in which all economies declined precipitously, Russia’s invasion of Ukraine last week has thrown a hugely lucrative lifeline to the US, European and other weapons manufacturers worldwide.

As the world reverts to a 21st century redux of the Cold War, albeit with even more advanced nuclear weaponry, the US and NATO states have commenced refurbishing their militaries for deployment along Russia’s borders and augmenting their individual operational capabilities. In a historic first, the European Union (EU) too has pledged to purchase weapons and transfer them to Ukraine, significantly boosting global materiel sales, for a seemingly just cause.

Nearly three decades after the Berlin Wall came down and the Soviet Union dissolved into component republics, the threat of conflict has once again gripped Europe, as President Vladimir Putin advanced to regain territories Moscow had lost in 1991 in its bid to recapture Soviet and, possibly even Tsarist glory.

Several local and overseas security analysts and diplomats agree that under the prevailing siege-like situation in Ukraine, the inexorable response of the US and fellow European powers was simply a return to arms guaranteeing, in turn, massive profitability to arms manufacturers for the foreseeable future, much like in the Cold War decades.

Furthermore, Germany’s decision to overcome its trauma and circumspection after World War II and spend Euro 100 billion or 2% of its gross domestic product to rearm its Bundeswehr, too will be a godsend for arms manufacturers internationally. Responding to Russia’s militarism, German Chancellor Olaf Scholz stated over the weekend that this massive outlay would not only include investments and armaments projects for his country’s military but also supply weaponry to Ukraine, ensuring monies for its makers.

According to the 2021 Stockholm International Peace Research Institute (SIPRI)’s annual report, 10 countries monopolised 90.3% of the world’s arms trade. Of these China, France, Germany, Russia and the US accounted for 75.9% of it during 2016-20, while Israel, Italy, South Korea, Spain and the United Kingdom offered an assortment of operationally proven equipment amounting to 14.4 % of overall global military sales. The rest of the world, including India – whose share was 0.2% – provided the remaining 9.7% that largely comprised largely low-end kit and components and sub-assemblies that were supplied to larger producers.

Russia’s invasion of Ukraine has, fortuitously presented many leading weapon makers joyous business opportunities which they extolled. News reports from the US revealed that Raytheon and Lockheed Martin, globally amongst the most advanced armament makers, for example, were openly telling their investors that the Ukraine conflict was good for business.

Raytheon specialises in air defence systems, especially guided missiles that include the deadly man-portable FIM-92 Stinger system, which single-handedly hastened the Soviet military’s departure from Afghanistan in 1989 after the Mujahideen employed them to down Russian helicopter gunships with deadly accuracy. Stinger variants – which cost $119,300 for each missile, without the attendant launchers and related equipment – were licence-built by the European conglomerate EADS in Germany and, would in all likelihood be part of the EU arms package to Ukraine. Lockheed Martin, on the other hand, manufactures directed energy weaponry, hypersonic technology and integrated air and missile defence systems, besides innumerable other products like fighters, helicopters and naval systems.

But both Raytheon and Lockheed Martin jointly produce the advanced FGM-148 fire-and-forget Javelin anti-tank missiles (ATMs), with a strike range between 2.5 and 4 km, that have emerged as the Ukrainian Army’s principal assault weapon against invading Russian armour. These platforms included T-72 MBTs capable of firing thermobaric rockets that suck up the surrounding oxygen upon landing, thereby choking to death large numbers of people in the vicinity, alongside T90s and newly developed, and even deadlier T-14 Armata MBT.

Thirty Javelin command launch units and 180 missiles, each priced at around $175,200, were part of the $60 million weapons package that the US had delivered to Ukraine last October in anticipation of possible Russian military adventurism. An additional $350 million in military assistance – also believed to contain a sizeable number of Javelins – was announced by US Secretary of State Antony Blinken on February 26. The value of the proposed EU package to Ukraine is, for now, unknown but it too would comprise Javelins, analysts noted.

According to the Chicago-based magazine In These Times, Raytheon CEO Greg Hayes in his January 25 ‘earnings call’, which is a teleconference or webcast in which a public company discusses its financial results pertaining to a specific period, included current tensions in Eastern Europe as factors from which his company stood to benefit. In a similar ‘earnings call’ the same day, Lockheed Martin head Jim Taiclet too told investors that the ‘great power competition (between the US and Russia over Ukraine) bodes more business for the company”, the magazine reported.

Furthermore, the socialist-leaning website went on to disclose that General Dynamics, another leading US military behemoth which is a part of Lockheed Martin and which also series builds the Abrams MBT and Stryker and assorted other fighting and tactical vehicles, had recently “boasted about past returns the company had seen as a result of such (Ukraine-like) disputes”. However, in its ‘earnings call’ on January 26 General Dynamics CEO Phebe Novakovic had, according to In These Times, desisted from speculating about future profits. But she had ambiguously stated that “speculation about the considerable tension in Eastern Europe and any subsequent impact on budgets is just, till advised, given the high threat environment”.  Or, loosely translated, military tension in Ukraine augured revenue for the company.

The magazine goes on to reinforce the omnipotence of the US military-industrial complex which it stated had employed some 700 lobbyists per year since 2017, or more than one lobbyist per member of Congress, to push their military wares. Besides, Raytheon, Lockheed Martin and General Dynamics were also co-founders of the US’s Centre for Strategic and International Studies in Washington which had doggedly been encouraging the Joe Biden administration to take immediate action in the event of a Russian invasion of Ukraine, In These Times reported.

“Everyone in (Washington) DC knows that weapon manufacturers are helping skew US policy towards militarism, but they usually try to be less obvious,” Erik Sperling, head of Just Policy, an anti-war organisation told the magazine. They were cashing in on tensions over Ukraine as the US poured weapons into the region, Sperling added, in what ironically appears to be a derisive evocation of Hollywood’s parody hit film, Charlie Wilson’s War. This film is based on the combined efforts of profligate US Congressman Charlie Wilson and a Central Intelligence Agency operative to arm the Afghan Mujahideen, based in Pakistan, to secure the eviction of the Soviet Army from Afghanistan, much to the profitable delight of America’s weapon industry.

The glee expressed by the Raytheon and Lockheed Martin CEOs over lucrative business prospects emanating from the Ukraine war also evoke memories of the prescient warnings by US President Dwight Eisenhower in his 1961 farewell speech. At the time, Eisenhower who headed the victorious US forces in WW2 had declared that the failure to adequately regulate the country’s defence industry could lead to perpetual war worldwide.

The outgoing president it seemed realised that after WW2, the US had emerged as the world’s greatest military power, but that its giant industrial war machine which had facilitated its triumph was not about to go back to making white goods and electric household appliances. In an intuitively accurate prediction, Eisenhower stated that the huge industrial and military machinery of defence with its insatiable appetite for profit, could not only lead to unending war but also ‘endanger’ US liberties and democratic processes. Events thereafter have proven the former US president to be spot-on but, as they say, that is altogether another story.

Ironically, Eisenhower’s caveats over the US military-industrial complex also applied analogously to Russia’s that rivals, and in some instances even bests the US in its production of combat platforms like fighter aircraft, nuclear-powered ballistic missile submarines (SSBNs) and varied missile systems, amongst other kits. The US, for instance, had little to rival Russia’s advanced Almaz-Antey S-400 ‘Triumf’ self-propelled surface-to-air missile system, of which India had acquired five units for $5.5 in October 2018 and, so far, taken delivery of just one.

Besides, in some spheres like metallurgy, sensor and radar technology Russia reportedly outdid the US, further enhancing competition between them and correspondingly ‘creating’ conflicts, like Eisenhower prophesied to boost equipment sales for pecuniary benefit. Moreover, Russian weaponry was also economically priced, compared to the US and hardy – capable of operating in extreme Himalayan temperatures and in desert regions – factors which accounted for its massive sale to Algeria, China Egypt, India, Vietnam and numerous Latin American states, amongst others.

In the meantime, analysts in Delhi further warned that the imminent union of Russian military technology and Chinese money, following their proliferating bilateral strategic, military, political and diplomatic alignments, could only further vindicate Eisenhower’s forewarnings of perpetual conflict, as Beijing flexes its muscles over Taiwan and its lingering border dispute with India, to regain its ancient Zhongguo or Middle Kingdom status.

In the end, the world’s arms manufacturers will simply continue to exploit man’s best to do its worst for grasping financial reward; till, of course, there is nothing left from which to profit.

Indian poet Sahir Ludhanvi sums it up best in a poem he wrote after India’s second war with Pakistan in 1965.

War is itself a problem, what solution can it offer to the problems?
It will result in fire and bloodshed today, and create hunger and need tomorrow.

How blockbuster films are aiding the Hindutva nationalism project