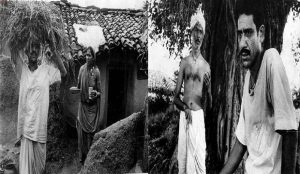 Satyajit Ray asked Om Puri to walk gingerly into the priest’s house in Sadgati’s first scene. Puri didn’t know what gingerly meant, so Ray said, “When a dog or a goat enters an unknown house, he enters gingerly.” That anthropomorphic instruction acquires an unsettling resonance in the film’s climax.

Much of the mythology around Satyajit Ray tends to focus on the acclaimed Apu trilogy, Charulata, Mahanagar, Jalsaghar, Nayak, Goopy Gyne Bagha Byne and so on. By some accounts, the legendary auteur’s own personal favourites were Charulata and Aranyer Din Ratri. 1981’s scathing Sadgati, with Om Puri and Smita Patil as leads, is rarely mentioned in the same breath and yet, it remains one of Ray’s most powerful broadsides against the caste system. Having the distinction of being Doordarshan’s first colour outing, Sadgati is 40 years old today but it’s message is still relevant. Caste-ridden violence of the kind that Sadgati denounces continues to be one of India’s great social evils even in the digital age.

You need merely glance at newspaper headlines to know how the ugly underbelly of caste-based violence and discrimination reveals the darker edges of a country that in other ways is fast moving towards globalisation and economic progress. What is shocking is that the persecution of the lower-caste even enjoys social sanction in many instances. Attacks on Dalit women, gang rape, lynchings, the Hathras incident, the Bhima Koregaon case… the atrocities against Dalits is a common reality that most of us turn a blind eye to. Rohith Vermula wrote that he was happier “dead than being alive.” In 1935, Babasaheb Ambedkar condemned caste violence as “man’s inhumanity to man.”

Sadgati’s untouchable protagonist Dukhi (Om Puri) is a victim of the human cruelty that set Ambedkar on a reformist path. The violence at the heart of Sadgati may seem insignificant compared to the far greater injustices meted out to the long-suffering outcasts but it is this very personalised form of Brahminical brutality that makes the film so impactful. They say when many people die it’s statistics. But (spoilers ahead) Dukhi’s death affects the audience personally because Ray makes you complicit in the crime. You see him struggle and being pushed around. In the India where Sadgati is set in, feudalism and social hierarchies is the gospel. And it seems nothing could have been done to prevent the oppression against men like Dukhi.

Sadgati’s principal cast is one that the Hindi parallel cinema audiences would instantly recognise, for they could well belong in Shyam Benegal’s socially relevant cinema — Om Puri, Smita Patil and Mohan Agashe have all been co-stars before. A tanner by profession and caste, Dukhi, played with raw naivety and a mix of fear and trepidation by Puri, has a daughter who’s getting engaged. When he goes over to the village priest’s (Mohan Agashe) home to fetch him in order to get the venerable Brahman to solemnise the engagement, he realises that the panditji is in no mood to grant him this favour so easily. He makes Dukhi toil like a beast of burden, while he himself enjoys his meal and afternoon siesta. On the other hand, his wife Jhuria (Smita Patil, naturalistic as ever in her rural act) waits impatiently for Dukhi’s return. Stung with hunger, Dukhi, meanwhile, passes out and dies of starvation, fever and over-exhaustion.

His corpse lies in the field, his dark shadow falling on the intersection in such a way that villagers cannot even access the well for daily water. In the end, the priest has to clear Dukhi’s body himself. He does so without even touching the remains, using a tree branch and rope to pull the dead man. Sadgati is no easy watch but the haunting climax stands out as probably the most gut-wrenching moment in a film that one critic called Ray’s ‘cruellest’ to date. When the movie first premiered on Doordarshan it “provoked a strong reaction from audiences and critics. It was said to be both too shocking and not shocking enough, even by the same critic,” writes Andrew Robinson in Satyajit Ray: The Inner Eye.

Ray was an avid reader who envisaged his cinema through the prism of literature. Like many of his classics, Sadgati was based on a Munshi Premchand short story. Both Ray and Premchand have been hailed as great “humanists.” In his writings, Premchand often critiqued the caste system, whereas Ray, the ultimate city man with a Western mindset, had brought the rural life and penury so poetically to the screen that he has been accused of “romanticising poverty.” Arguably, Ray’s best work is his lyrical adaptation of Bibhutibhushan Bandyopadhyay’s novels for the Apu trilogy. Curiously, for his only two Hindi films — besides Sadgati, there is Shatranj Ke Khilari (1977) — he turned to Premchand in whom he may have found a kindred spirit, the way he did with Bandyopadhyay. If Ray had been able to make credible and authentic-looking films on subjects he had little knowledge about, say the rural Indian life or the caste system in this case, it was, as he acknowledged, because he relied on the authors to provide him the cultural canvas.

Born into a Calcutta nobility, the filmmaker was fluent in English and Bengali, but not so much in Hindi. “Even the coaching of actors — where I often act out the pieces myself in advance — became impossible during the making of a Hindi-language film. Since I do not have enough knowledge of the language, I can only give a certain amount of verbal direction to the actors,” the maestro once said in an interview. According to Nandita C. Puri’s biography ‘Unlikely Hero: Om Puri,’ Ray was keen to cast Puri after watching him in Aakrosh (1980). Puri was still some years away from being a high-in-demand arthouse star. Nandita mentions an interesting exchange between Ray and her husband during the film’s making. On the first day of the shoot Puri was obviously nervous given Ray’s stalwart-like reputation. For the first scene, Ray explained to Puri to walk gingerly into the priest’s house. But Puri didn’t know what gingerly meant. Ray replied, “When a dog or a goat enters an unknown house, he enters gingerly.” Without meaning it, that anthropomorphic instruction acquires an unsettling resonance in Sadgati’s climax. Dukhi, the man, the father, the husband, the workhorse, the perpetually harassed nobody dies an animal’s death and ultimately comes to rest in peace with wild carcasses.