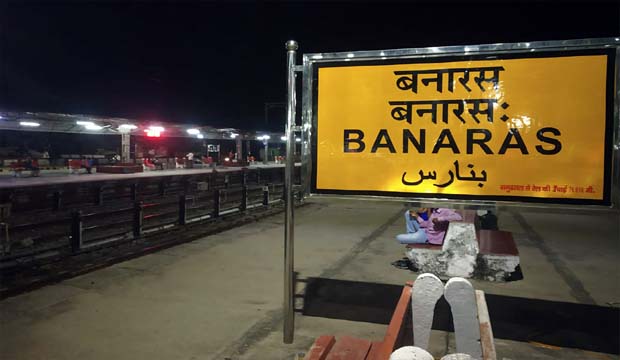 Several Hindus and Muslims continue to live in communal harmony despite the gaining prominence of the BJP’s Hindutva narrative.

The inter-religious culture of Banaras, comprising major religions, like Hinduism, Islam and Buddhism, is visible in the harmonious coexistence of people of different faiths in the holy city.

Communal harmony, especially between Hindus and Muslims, is quite a feat achieved by the sheer resilience of the people of Banaras. The Muslim weaving community weaves the majority of the famous Banarasi silk sarees, which are traditionally a part of Hindu marriages. Muslim artists perform at the famed Sankat Mochan Sangeet Samaroh held at Hanuman’s temple.

Unfortunately, Hindu majoritarianism is seeping through the strong secular boundaries of the city. For example, alleged members of the Vishwa Hindu Parishad and the Bajrang Dal put up posters around the ghats warning non-Hindus to not visit the Ganga’s bank in January. However, public pressure and awareness generated by SabrangIndia and the Citizens for Justice and Peace prevented the incident from snowballing into a major issue.

Yet Islamophobia is thriving in the city with general prejudices against Muslims such as caricaturing them as terrorists or a community that wants to destroy India. Such stereotypes are further inflamed by the political narratives of Love Jihad, Marks Jihad and Corona Jihad, woven by the Bharatiya Janata Party (BJP)-led state government of Yogi Adityanath.

“It is very important that we rise above caste differences and vote for the BJP. India is the only country with a Hindu majority. If we don’t support our religion and the party, we will lose our country,” says Madan Lal, the owner of a grocery shop at Vishweshwar Ganj, offering the logic of “saving the Hindu Rashtra under the Hindutva agenda”.

Lal is not alone in believing the narrative that Muslims will take over the country and impose Islam if Hindus don’t stand up. Ganesh Kumar is not worried about the rising unemployment in the state and the skyrocketing prices of essential items. “In spite of unemployment and inflation, we should vote for the BJP—the country is above these issues. We have to save our country first. Other political parties will make our country an Islamic state,” he shoots back.

Arpit, a student of Sanatan Dharm Inter College actively participates in Rashtriya Swayamsevak Sangh (RSS) activities. “It should be the dharma of students too to save the Hindu Rashtra and mobilise for organisations like the RSS,” says Arpit, who works as an RSS volunteer for, at least, two to three days a week promoting the ideology of the Hindu Rashtra.

Muslims question the narrative that the community should vote only for the BJP to prove their patriotism. “The Muslim community of Banaras has always been a supporter of the Samajwadi Party (SP). Is it necessary to vote for the BJP to save the country and prove your patriotism and love for the country?” asks a visibly annoyed Chand, who stays at Ramnagar.

Chand is angry with the state government for “causing religious polarisation in the state” in the last five years. “India is my country. We have been living and working here for centuries. How can we not love India?” he asks adding, “we are very disappointed with the government for trying to turn Hindus against us to cover up their failure in addressing real issues such as unemployment.”

Islamophobia might be expanding its roots in Banaras but the city has managed to preserve its Ganga-Jamuni Tehzeeb. Mentioning the Alamgir Mosque, Vedji, a temple priest at Panchganga Ghat, accompanied by his Muslim friend, says, “The mosque is said to have been built by Aurangzeb after the demolition of the Bindu Madhav Temple. It is also a Hindu-majority locality but many of my Muslim friends regularly visit it. There is no communal tension in the area.”

Legendary artiste late Bismillah Khan is said to have started playing shehnai at the famous Balaji Temple, located at Panchganga Ghat. He is held in high esteem amongst all the musical gharanas of Banaras, where the maestro’s successors are carrying forward his legacy.

People of different faiths, including Hindus, pray at the several small and big Muslim shrines dotting the city. “It cannot be denied that some Hindus in the city disrespect and hate Muslims. The feeling has become more prominent in the last few years due to repetitive narratives of Hindutva groups,” Vedji says. “But the bonding between Hindus and Muslims in the city is still intact. We won’t lose the Tehzeeb at any cost.”

Mentioning the “fake narrative of Love Jihad”, Chand says, “In my extended family, one of my relatives married a Hindu woman. Both the families intermingle very well with no problems. The fake theory of Love Jihad is pushed by the BJP to gain political advantage and end our harmony,” he says.

Asif Ansar (35), a working professional, says that he doesn’t support the BJP because of its polarisation. “Whenever a BJP government comes to power, it always uses these kinds of tactics.”

‘India losing over Rs 70,000 crore in taxes to other countries’