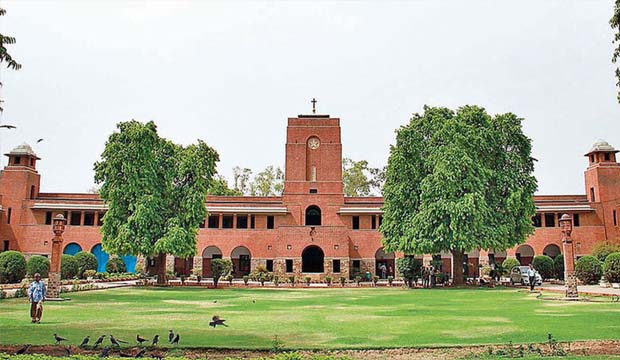 Among the changes being implemented, or that will be implemented in Delhi University in recent times, is the scrapping of Bengali writer and activist Mahasweta Devi’s short story Draupadi along with two Dalit authors — Bama and Sukirtharini — from the BA (Hons.) English course. The decision by Delhi University Academic Council, while approving changes to the syllabus, has stirred controversy too, and has been opposed by many.

I first heard of Mahasweta Devi’s short story Draupadi (1978) while pursuing my Master’s programme. I passed my Bachelor’s from DU in 2013 and had not taken up the Women’s Writing paper as an option. And so, had missed out on it. But a classmate brought it up during a discussion on the renowned post-colonial critic, Gayatri Spivak, who not only translated the story from Bengali to English but also wrote the foreword to the translation, both of which, until recently, was part of the DU BA (Hons.) English syllabus.

As was my practice back then, I immediately went back to my paying guest accommodation and read the story. The narrative centres around Dopdi Mehjen, a tribal woman from the Santhal tribe of West Bengal, who is accused of being a ‘dreaded’ Naxal and picked up by the police. An officer, known as Senanayak, instructs his men to “do the needful” to extract information, after which they ask her to “cover up.” Dopdi, however, refuses to do so in an act of defiance against those wishing to ‘shame’ her into submissiveness.

The discomfort of teaching Draupadi

As per ThePrint report, a member of the DU panel said, “The scenes of rape have been described in gruesome detail which can make grown adults uncomfortable, I don’t know how professors are teaching the text.”

As both a student and later, briefly, an Assistant Professor at DU, I had the opportunity to experience this discomfort — the kind that stems from confronting narratives that we usually do not like to acknowledge, for example, brutality of violence on women’s bodies, especially in areas of conflict.

Reading Draupadi was a very different experience from teaching it. I wanted to be prepared, I wanted to be able to answer the questions that students might ask.

The description is spine-chilling, no doubt. The “problematic content” in Draupadi, which the DU panel found objectionable, refers to the scene when Dopdi realises that she has been raped. Devi’s story explicitly states the sensations of the protagonists’ body and the places she has been wounded.

I remember how the expressions on my students’ faces changed when we discussed it in class. There were wincing noises, and a few had expressions of horror. I was trying to hide how my voice was breaking and was simultaneously reminded of a very similar incident from my first year when a teacher was reading aloud parts of William Dalrymple’s City of Djinns, which discusses the 1984 Sikh riots in Delhi.

One pertinent question that lingered in my mind, and something that one of my students also later asked, was regarding honour and shame. A student asked if the rape was also to teach Dopdi a lesson for standing up against the upper class. That also brought to fore the question of class and caste within that classroom space, because I wondered about the impact of the story on Dalit students. And yes, I replied, rape was a strategy used by the Senanayak not simply to extract information, but also to put the Dalit woman ‘back to her place’, as an instrument of the State.

Draupadi as a story has many layers of course, most of which Spivak touches upon succinctly in her foreword. Spivak’s landmark works, Can the Subaltern Speak? (1983) and The Trajectory of Subaltern in my Work (2003), talks of a gendered subaltern. Draupadi, the Pandava queen, becomes Dopdi, the subaltern rebel in the story, and opens up avenues that discuss the doubly-oppressed Dalit woman, both due to her gender and caste.

“I will not let you put my cloth on me. What more can you do? Come on, kounter me – come on, kounter me – ?” Says Draupadi, as she pushes back Senanayak with her two mangled breasts, and for the first time, the authority is terribly afraid to stand before an unarmed target.

The conclusion of Draupadi offers the strongest image of resistance. In fact, I am reminded of how I spoke of Shakespeare’s Tempest in reference to this where Caliban tells his master Prospero, ‘You taught me language; and my profit on’t/Is, I know how to curse’

A student asked, is the Kerala breast tax somehow linked? And needless to say, I was very impressed. For those unaware, it is a reference to the story of Nangeli, who cut off her breasts to protest against the breast tax imposed in Kerala on women from oppressed castes. And since the collection of stories, of which Draupadi is a part, is named Breast Stories, I was grateful to also ask students what they thought about Nangeli, a Dalit woman defying the ‘upper’ caste men stopped women from oppressed castes to cover their breasts.

Of course, a quick question followed, because while Nangeli wanted to cover her breasts, Dopdi refused to. I asked them to look at it as a woman’s choice, rather than something that is enforced. And how breasts, seen as the locus of female sexuality, can also be a weapon of subversion when exercised by a woman.

When I recall the class today, I remember how the Armed Forces (Special Powers) Act and its misuse was something I grappled with while teaching the text, and also mentioned. Needless to say, not many knew of it but were interested to read more. I spoke of the nude protest by 12 Manipuri women on 15 July 2004 against the Indian Army over the rape and killing of Thangjam Manorama Devi. For me, that was a chilling reminder that fiction is never far from the truth, and can resurface over and over again, as long as women’s bodies remain the site of conflict and violence. And for that, we must choose ‘discomfort’ and know these narratives.

From ‘Basavanna Model’ to ‘Yogi Model’: The Fall of Karnataka Under...