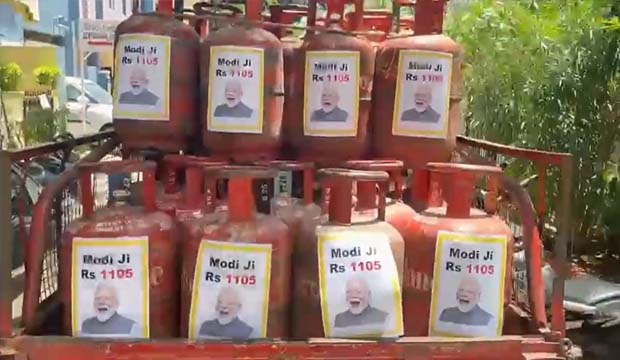 The Union finance minister had earlier pulled up Kamareddy district collector Jitesh Patel for not putting up a photograph or flex board of Prime Minister Modi at a fair price shop in the district.

The move was a jibe at Union finance minister Nirmala Sitharaman who, a day earlier, had pulled up Kamareddy district collector Jitesh Patel for not putting up a photograph or flex board of Prime Minister Modi at a fair price shop in the district.

On Saturday, a day after the finance minister’s comments, TRS social media convenor M. Krishank posted a video on Twitter where LPG cylinders with posters of a smiling Narendra Modi can be seen along with ‘Rs 1105’ – the current price of cooking gas – written underneath.

“You wanted pictures of Modi ji, Here you are @nsitharaman  ji …” the tweet read.

According to a report in the Deccan Herald, TRS leaders have been raising the issue of rising LPG prices across the state, particularly in assembly constituencies such as Dubbaka and Munugodu, where by-elections have pit the TRS against the BJP.

Telangana has the highest LPG prices in the country and TRS leaders have held the Modi-led BJP government at the centre responsible for the high prices.

On Friday, Sitharaman had visited a fair price shop in Burkur village in Kamareddy district while on a two-day visit to the state under the BJP’s Lok Sabha Pravas Yojana where she was inspecting various Union government-funded schemes.

At the shop, the finance minister noted that there was no poster or flex board of Modi on the premises and pulled up district collector Patil, saying that it is mandatory to have a picture of the prime minister at any shop disbursing rice under the Union government’s scheme.

She also said that it is the responsibility of the district collector to ensure that these pictures are put up at all the fair price shops in the district.

“The rice which is sold at Rs 35 in the open market was being distributed to people at Re 1 here. How much is the state government bearing?” she asked Patil, according to PTI.

Further, when Patil said he did not have the exact figures, the finance minister demanded he get them to her in 30 minutes and threatened to expose the state government at a press conference if he didn’t do so.

“You think about it and within half-an-hour again before my address to the media (come up with an answer). So that I can tell them that even if the collector could not answer my question immediately,… he struggled and got the information,” she said.

“I am telling you today. Our people will come and put up the prime minister’s banner here. You will, as the district administrator, ensure that it shall not be removed. That it shall not be torn,” she told Patil further. “If a banner is not there, I will come to this place again.”

Sitharaman’s criticism of Patil was broadcast on TV news channels and videos of the incident were later uploaded on social media, where they gained a large number of views.

Sitharaman’s comments drew harsh criticism from several TRS, who claimed they were “shocked” by the finance minister’s “unruly” conduct.

In a tweet, urban development minister in the state government K.T. Rama Rao said that he was “appalled” by Sitharaman’s remarks and added that they would “demoralise hardworking IAS officers”.

State health minister minister T. Harish Rao, at a press conference condemned Sitharaman’s conduct and said that the cost of the rice distributed at the fair price shops was actually shared by the Union and state governments.

According to him, the Union government supplies 10 kg of rice per month at Rs 3 per kg to only 50-55% of cardholders under the National Food Security Act (NFSA). The remainder, Rao claimed, comes from the Telangana government at its own cost. He added that the state government spends Rs 3,610 crore on the free rice scheme every year.

“This is ridiculous. She is talking in such a way that it degrades the stature of the prime minister. She was talking as if all the rice (which is given free of cost) was being supplied by them (Centre),” PTI quoted Rao as saying.

Further, in another potshot at the finance minister, KTR tweeted that for every rupee Telangana puts into the economy, it only gets 46 paise in return.

“Madam, time to put up a banner: ‘Thanks to Telangana’ in all BJP states at PDS shops,” the Tweet further reads.

Hard Times: How do we know India is facing an economic...

Delhi Man Lynched on Suspicion of Cow Slaughter, 2 Others Injured