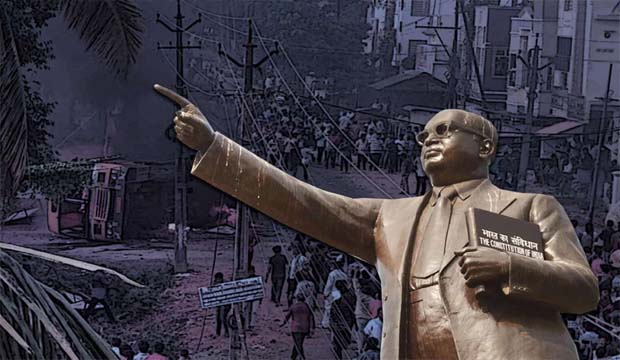 As Amalapuram reels in the aftermath of the violent protests against Andhra government’s decision to name Konaseema district after Dr BR Ambedkar, TNM explores the ground reality of how and why such a retaliation was orchestrated.

The town of Amalapuram in Andhra Pradesh has turned into a fortress. Dressed in riot gear and armed with helmets, hand held-riot control shields, arms and batons, paramilitary personnel have set up checkpoints at various locations, a novel sight for the residents of the otherwise peaceful town. It was just a few days ago, on May 24, that violent protests broke out in Amalapuram — now the headquarters of Konaseema, the new district carved out of the erstwhile East Godavari — staged in retaliation to the government’s decision to rename Konaseema as Dr BR Ambedkar Konaseema district. The protest soon snowballed into full-blown violence, leaving several vehicles gutted, the houses of a minister and an MLA were set on fire, and around 20 police personnel were injured as protesters resorted to stone pelting.

The government responded by calling in additional forces and deploying paramilitary personnel in large numbers. “On the first day, we were rattled to see all these police personnel and inspections at every street corner. The internet was also suspended. This is something we haven’t seen so far in this area. But now that it is the second day, we are getting used to this,” autorickshaw driver Pulidindi Venkateshwar told TNM on May 25.

The police team investigating the violence has found that the events were pre-planned and orchestrated. Out of the 46 people who were detained in this regard on the first day, as many as 19 people have been arrested so far. The police say they have substantial evidence to prove the role of those arrested in the violence that unfolded in Amalapuram. But there remains a question that has largely gone unanswered: how, and why, was the move to name the district after the architect of the Indian constitution met with violence? Before attempting to understand this, let’s first take a deeper look at the social construct of the region in question.

Konaseema district lies between two tributaries of the Godavari river, making it a highly fertile area inhabited by people predominantly in the agriculture sector. According to the 2011 census, the region houses a population of around 17.19 lakh people. Hindus constitute nearly 97.4% of the district’s population. Nearly 25% of the people here belong to Scheduled Caste (SC) groups, while less than 1% belong to Scheduled Tribes (ST). The Kapu and Setti Balija communities, both dominant caste groups, constitute the remaining population. So, why did the Jagan Mohan Reddy government decide to prefix the name of the district with Dr BR Ambedkar, just days after it announced on April 4 that the district would be referred to as Konaseema? The decision to rechristen the district’s name was announced on May 18.

A demand to rename the district

When it was known that the state’s districts were going to be divided and renamed, the BR Ambedkar Jilla Sadhana Samithi along with a number of other Dalit organisations had requested the government to rename the district as Dr BR Ambedkar Konaseema district, Samithi convenor Janga Babu Rao informs TNM. “Three (Razole, Amalapuram and Gannavaram) out of the seven constituencies in Konaseema are SC reserved. If you consider the SC groups alone, we are around five lakh in population. The Amalapuram Lok Sabha constituency is also a reserved constituency. It is considering all this that we requested the government to name the district as Dr BR Ambedkar Konaseema district. We too wanted ‘Konaseema’ to be retained in the district’s name. We requested for Dr BR Ambedkar to be made part of the district’s name because he is our god. We have no other god. According to the Manu Dharmashastra (believed to be the first legal text and constitution written by sages), we were not even allowed inside temples. Hence, our only god is Babasaheb Ambedkar.”

On May 13, Chief Minister Jagan Mohan Reddy had arrived at Muramalla in the district, as part of a programme in connection with the fishers’ welfare scheme Matsyakara Bharosa. In the backdrop of the event, Janga Babu Rao and some other Dalit representatives met the Chief Minister and reiterated their demand to add Dr BR Ambedkar to the district’s name. “We urged the Chief Minister to consider our request, pointing out how there was a large population of SCs in the constituency. In the following days, the Chief Minister must have made several rounds of consultations and even looked at the intelligence reports on the backing we have. It was following this that the government, on May 18, announced that the district would henceforth be referred to as Dr BR Ambedkar Konaseema district, fulfilling our wishes,” Janga Babu says.

Soon after the government announced the renaming of the district on May 18, a number of communities including the powerful landholding communities such as Kapus, and the OBC communities Settibalija and Nagavamsam had begun to voice their opposition to the decision. “The dominant caste groups in the region are already victims of the SC and ST (Prevention of Atrocities) Act. They are apprehensive of what the Dalits might do if the district’s name is changed to Ambedkar. They fear what will happen to them,” says a member of the Konaseema Parirakshana Samithi, a group that is now fighting to drop ‘Dr BR Ambedkar’ from the name of the district. The man, who belongs to the Settibalija community, adds that there was a “growing worry” that the new name might “embolden” the Dalits.

Speaking to TNM, Ch Mahesh, a Kapu man who owns a travel agency in the town, says that while his community had nothing against Ambedkar per se, they felt it was not right for the government to favour only one community. “The Dalits are making it seem as if Dr BR Ambedkar is only a representative of their community. We all respect him as the father of the Indian Constitution, on par with Mahatma Gandhi and Jawaharlal Nehru. But there is a strong feeling that the government is favouring members of one community by naming the district after Ambedkar. Babasaheb Ambedkar is a great man. That shouldn’t be reduced by just naming a small district like Konaseema after him,” says Mahesh.

“Naming the district after Dr BR Ambedkar is like giving them (Dalits) too much power. The fear is that this move can backfire against the other castes, as they may use it as a weapon. The government has done this for political gains. It isn’t like they really love or care about Babasaheb Ambedkar,” the businessman goes on to add.

M Shiva Anjaneyulu, another member of the Kapu community, is the owner of a cool drinks joint in the town and a self-declared fan of Jagan Mohan Reddy. He and his family members have benefited from the various welfare schemes introduced by the CM, says Shiva, formerly a carpenter by profession. “Thanks to the benefits I received due to these welfare schemes, I am successfully running a shop today,” he says. Despite this, Shiva is critical of the government’s move to rename Konaseema after Ambedkar, claiming that the government is trying to earn the goodwill of the SC community in Konaseema by doing so. “Frankly, Jagan has not fulfilled many of his promises, and there is an anti-Jagan sentiment among the people here. The government seems to have sensed this, and hence decided to give in to this demand for political gains,” he says. “It is also a fact that a lot of people are ashamed to say that they are from Dr BR Ambedkar district,” he adds, least bothered about hiding his caste biases.

Janga Babu, who is also a former advocate and a Dalit activist, calls out these ‘fears’ expressed by people of other castes for what they are — an outcome of their deeply ingrained casteism. “They think that if Ambedkar’s name is added to the district, the SCs will go out of control. Their ‘fear’ is that the Dalits will feel emboldened. At one point of time, we were treated as slaves who were not even allowed to stand in front of Brahmins without folding our hands. Even today, despite the SC communities’ growth through education, they want to pelt stones at us,” says the BR Ambedkar Jilla Sadhana Samithi convenor.

Pavan Kumar, a journalist and political analyst, is suspicious of the government’s intentions behind renaming the district. “The demand to name Konaseema after Ambedkar originated much before the creation of these districts. Huge processions were also conducted to draw this matter to the government’s attention. But the new names were announced on April 4, and the fresh notification proposing to prefix Ambedkar to Konaseema’s name came as many as 48 days after the formalities were completed and the districts came into existence. If the government was really honouring a request from political and apolitical quarters, this should have happened before April 4,” Pavan points out. The government has come out with this move at a time when polarisation is happening across the state and Konaseema is turning into the epicentre of caste politics, he says, adding that this timing was cause to suspect its intentions. The government was using Ambedkar as a trump card, but clearly it backfired, he further states.

Several Dalit groups have demanded the arrest of and immediate action against the people behind the Amalapuram violence on May 24, irrespective of the political affiliations of the accused persons. Meanwhile, the 30-day period allotted by the government for people to submit complaints and feedback on the decision to rename the district is nearing its end. “We will wait and watch,” the activists say. “The ball is now in the government’s court. They will have to decide if they will keep Babasaheb’s name or change it back to just Konaseema. We will maintain peace until a decision is made, and decide on our further course of action accordingly.”