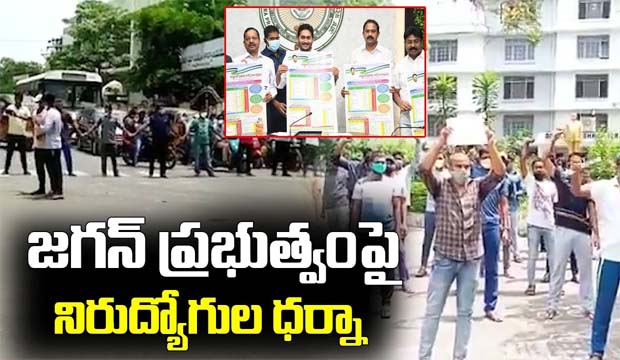 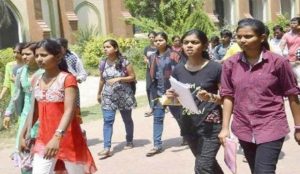 While the annual recruitment calendar, released on June 18, notified 10,143 jobs to be filled till July 2022, the unemployed youngsters say they were expecting more job posts.

Hundreds of unemployed youngsters in Andhra Pradesh took to the streets on June 21 to express their discontent with the annual recruitment calendar released by the state government three days ago. The recruitment calendar is a month-wise schedule for the next nine months, to fill vacancies in various government departments, including health, revenue, tribal welfare and higher education. The YSRCP government has touted the ‘job calendar’ as a way to streamline the process of recruitment. Chief Minister YS Jagan Mohan Reddy said that the calendar would boost confidence among the youth. Many unemployed persons, however, say that they are heavily disappointed with the calendar, as it only notifies 10,143 jobs, while there are more than 1.5 lakh government jobs to be filled.

Several unemployed people, students and members of SFI (Students’ Federation of India) and DYFI (Democratic Youth Federation of India) showed up at the APPSC (Andhra Pradesh Public Service Commission) office in Vijayawada to protest the present job calendar, and to demand the government to release a new calendar, which includes the remaining posts as well. According to DYFI, there are around 1.84 lakh vacant posts in various government departments, but the calendar only shows 10,143 posts to be filled till July 2022.

“There are nearly 2,000 vacancies in Group I, II, III and IV, but the calendar has only notified 36 jobs,” DYFI state president G Ramanna said. Repeated assurances of a mega DSC (District Selection Committee) recruitment drive to fill teachers posts in thousands have also not been fulfilled, Vizianagaram SFI district assistant secretary Ramu pointed out. According to teachers’ organisations, there are nearly 25,000 vacant posts for teachers in state government schools.

“Earlier they said that village and ward volunteers are for service-oriented people. They weren’t exactly considered jobs. But now they have considered them as outsourced jobs,” Ramu said. Volunteers, who receive an honorarium of Rs 5,000 for ensuring last-mile delivery of the state government’s welfare schemes, held protests recently demanding a pay hike, health insurance and other benefits, and job security. In response to their protests, CM Jagan wrote an open letter to volunteers saying the nature of their job was “purely voluntary”, and asked not to be influenced by “vested interests.”

Youth organisations have demanded that a new calendar be released, after including teachers’ posts, as well as Group III and IV posts, constable posts and others. “The present calendar is a big blow to unemployed youth eagerly awaiting job notifications,” Ramu said. Apart from the APPSC building in Vijayawada, protests were held at various district collectorates in eight of the 13 districts in the state. The police detained several protesters for violating the curfew due to COVID-19.

Why We Must Defend Anand Teltumbde

‘Starvation Scarier Than the Virus’: A Young Mortuary Worker Speaks on...