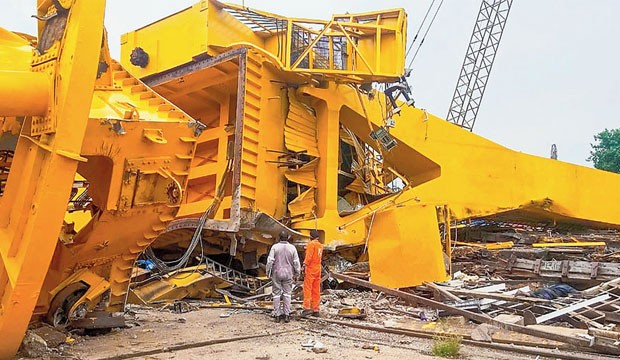 According to central trade unions, there have been 56 industrial accidents in Jawaharlal Nehru Pharma City in Vishakapatnam’s Parawada mandal in the last ten years in which 37 workers were killed.

Hyderabad: In the last three months, 29 people have died in four industrial accidents in Andhra Pradesh’s Visakhapatnam city. On August 1, 11 workers were killed when a crane crashed in the city’s Hindustan Shipyard Limited. Previously, two accidents were reported in Jawaharlal Nehru Pharma City in Parawada mandal in which three workers died and 15 people succumbed due to Styrene monomer gas leakage at LG Polymers company in the city.

Observers believe that violation of safety norms is the commonality in these series of industrial accidents while unions are pressing for effective implementation of laws concerning safety and health of workers.

According to initial reports, the crane collapsed while the workers were commissioning a trail run on it. The work on the crane reportedly commenced in 2009 by Anupama Industries, but the company left in 2012 leaving the work half done. The work on the crane began again this year by another contracting firm, Greenfield Corporation. The YSR Congress Party-led state government and HSL had commissioned two separate probes into the accident.

Centre of Indian Trade Unions (CITU) Andhra Pradesh President CH Narasinga Rao said that “it was a clear case of negligence, as adequate precautions were not taken, since the crane had been under construction for such a long period”.

The central and state governments’ push for ease of doing business has resulted in the weakening of safety systems in industries, says J V Satyanarayana Murthy, Communist Party of India state secretary. Speaking to NewsClick, Murthy said: “Although HSL is a public entity, in the recent past, there has been a massive cutdown in its manpower and private contractors are being employed for major work who are failing to comply with mandatory safety measures leading to such accidents.”

As per the Labour Department’s factory inspection system in the state, inspections are done based on the risk criteria. The low risk factories (those employing 20-150 workers) will be inspected once in three years, the medium-risk factories (employing 150-1,000 workers), once in two years and the high-risk (employing 1,000 and above), once a year.

FREQUENT ACCIDENTS IN VISAKHAPATNAM’S PHARMA CITY
According to central trade unions, there have been 56 industrial accidents in Jawaharlal Nehru Pharma City in Vishakapatnam’s Parawada mandal in the last 10 years in which 37 workers were killed.

Pharma City is a joint venture by Ramky Group and Andhra Pradesh government which has 80 chemical units.

In July, a major explosion broke out at Ramky Solvent unit in the Pharma City killing a senior chemist while several others escaped with injuries.

Earlier on June 29, hydrogen sulfide gas leaked from a reactor at a Sainor Life Sciences Pvt Ltd unit in the Pharma City that killed two workers and four others were severely injured from inhalation of the gas.

State government probes into the two recent accidents in the Pharma CIty found procedural lapses and improper safety systems at the units.

“Factories are employing unqualified persons for maintaining safety systems to cut costs while state authorities such as pollution control board and labour department are failing in regulating factories,” alleged Murthy.

L G POLYMERS STYRENE GAS LEAKAGE
On May 7, Styrene gas leaked from L G Polymers factory in Visakhapatnam’s RR Venkatapuram in which 15 people died and hundreds who were living in the villages surrounding the factory were hospitalised. According to the government-appointed high power committee that probed the industrial disaster, the root causes of the Styrene gas leakage are “poor design of the tank; inadequate refrigeration and faulty cooling system; absence of circulation and mixing systems; inadequate measures and parameters; poor safety protocol; poor safety awareness; inadequate risk assessment response; poor process safety management system; slackness of management; insufficient knowledge of the chemical properties of styrene, especially during storage conditions; total breakdown of the emergency response of the procedures; and safety protocol not being followed by the authorities during the lockdown period.”

Stan Swamy tribute: A prophet is a threat to the powerful

Need Rohith act for the protection of dalith students in the...