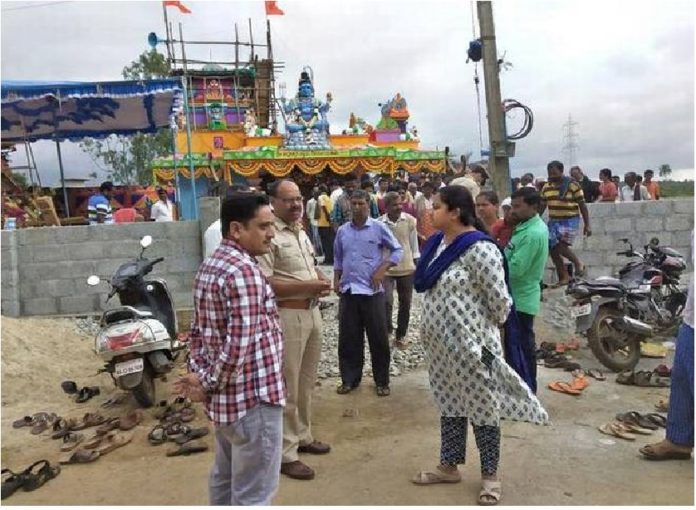 When the 35 Dalit families reached the temple to offer prayers, they were humiliated and abused with casteist slurs.

Thirty five Dalit families were humiliated, abused, and denied entry into a temple in Karnataka’s Hassan district on Sunday by members of the dominant Vokkaliga and Lingayat castes. Kadaga village residents say they’ve seen rampant caste discrimination, and conflicts around the village temple for over 70 years now. However, on Sunday, when the temple was being opened after renovations that the Dalit families had also contributed to, they thought the temple entry issue was settled. But when they reached the temple to offer prayers, they were humiliated and abused with casteist slurs. The story was first reported by The Hindu.

“One of the village elders, Bore Gowda, and some of his men were standing outside the temple and they did not let us inside,” says 65-year-old Devamma, a resident of the village, “Bore Gowda owns a lot of land in the village and he is a powerful man. He began shouting at us.”

“He compared us to chappals, and said that like chappals, we must also be kept out of the temple,” she alleged, “They told us that the consequences would be bad if we did not listen to them.”

Soon, over 100 people belonging to the dominant castes gathered outside the temple and barricaded the entrance, according to witnesses. A distraught Devamma then called the Dalit Sangharshana Samiti Hassan district president Chetan and informed him about the developments. Chetan immediately called the Superintendent of Police, Ram Niwas Sepat, and informed him about the incident. Chetan also intimated the Assistant Commissioner Dr Nagaraj and also the Tahsildar G Meghana, who arrived at the spot. Speaking to TNM, the SP, Ram Niwas, confirmed that Dalits were denied entry into the temple by the dominant castes.

Speaking to TNM, Chetan says that despite the presence of the officials and activists, the dominant caste people of the village hurled abuses at the members of the Dalit community. There are around 35 Dalit families in Kadaga village and around 65 Vokkaliga and Lingayat families, Chetan says.

“The Savarnas have been intimidating the Dalits in the village for the last 70 years. The temple itself is over 70 years old. It is only in the last four to five years that Dalits are being allowed into this temple,” Chetan says.

In 2013, the JD(S) MLA from Hassan, HS Prakash (now deceased) brought the temple under the Muzrai Department’s purview in order to ensure that such discrimination doesn’t continue. The temple was being renovated and members of the Dalit community were allowed to enter the premises. Dalit families also donated funds for the reconstruction works. However, after the MLA’s death in November last year, the practice of untouchability allegedly continued in the village.

“Since my father’s time, we were never allowed into the temple. Around 20 years ago, some people from our community had tried to enter the temple. The dominant castes had, back then, pelted stones at our homes after the sun went down. There is a separate part of the village for Dalit houses. We are targeted by them, and we are scared,” Devamma says.

According to Chetan, on Sunday afternoon, the government authorities, police and members of all communities gathered outside the temple to sort the issue out. The Tahsildar Meghana is said to have held talks with the village residents.

“We informed the people that either everyone would be allowed inside or no one would. We held talks with them today (Tuesday) as well and we have warned them that if Dalits are intimidated or stopped from entering the temple, action will be taken. We were not able to register an FIR as no one filed a complaint and we could not book the entire village. We will register an FIR if anyone comes forward and names the people who committed this atrocity,” SP Ram Niwas Sepat told TNM.

India’s COVID Shambles: It Took Us Seventy Years, Not Seven, To...